The 24-year-old spent last season on loan at the Emirates Stadium and after an inconsistent start to life in north London, the midfielder became an integral part of Mikel Arteta’s side during the second half of the campaign.

Ceballos formed an impressive partnership alongside Granit Xhaka in the middle of the park and played a key role in helping Arsenal win their 14th FA Cup with excellent performances against Sheffield United, Man City and Chelsea.

The Spanish international returned to Madrid this summer but with a regular start spot in Zinedine Zidane’s side looking unlikely, Ceballos decided another loan move away from the Bernabeu was the best decision.

He had other offers to remain in La Liga but Arteta convinced Ceballos to return to Arsenal and the midfielder reportedly flew-in to North London on Thursday to undergo his medical and put the finishing touches on his move.

Super Eagles player, Ahmed Musa and his wife, Julie, have welcomed their second child together, a boy. This will be Julie’s second child and Ahmed’s fourth child as he already has two children from his first wife, Jemila.

Ahmed took to his Instagram page to announce the birth of his son.

”Life is indeed a gift and Allah has decided to give us a gift that can’t be bought with money. He decided to bless my family this morning with a bouncing baby Boy
?
Mother, baby are doing well Thank you for all your prayers and support always.” he wrote

The Germany international, 24, has agreed on a five-year deal with the club and becomes Chelsea’s second signing of the summer after winger Hakim Ziyech from Ajax.

The Premier League club agreed to pay €50m (£45m) to trigger the release clause of Werner, who will earn more than €10m (£9m) per season at Chelsea.

Speaking on his move to Chelsea, Werner said: ‘I am delighted to be signing for Chelsea, it is a very proud moment for me to be joining this great club. I of course want to thank RB Leipzig, the club and the fans, for four fantastic years. You will forever be in my heart. I look forward to next season with my new team-mates, my new manager and of course the Chelsea fans. Together we have a very successful future ahead of us.’

Chelsea director, Marina Granovskaia added: ‘We are very excited that Timo Werner has chosen to join Chelsea. He is a player who was coveted all over Europe and it is no surprise, he has that rare mix of being young and exciting and yet established and proven. We can’t wait to have Timo on board, but until then we wish him and RB Leipzig all the best for the rest of this season.’

Timo Werner will see out the remainder of the Bundesliga season with RB Leipzig before joining up with his new team-mates in July.

He has so far made a total of 157 appearances for RB Leipzig, scoring 93 goals and making 40 assists for the German club.

According to Spanish news agency EFE, all players and staff, who arrived in gloves and masks for the medical exams, were tested for the novel Coronavirus, and  22-year-old Lodi tested positive.

It was also reported that nine other Atletico players were found to be immune from the virus after they showed antibodies, potentially having had and overcome the virus.

This means, they are no longer contagious and will, therefore, be able to train with the rest of their team-mates.

Spanish’s La Liga is tipped to return on the 20th of June with the remaining fixtures set to be played in five-weeks.

According to Mail Online, the 31-year-old footballer is accused of causing dangerous bodily harm to Senler, who is the mother of his twin daughters, in an incident last year.

The publication reported that the public prosecutor’s office No 1 of Munich have been investigating the incident since the backend of 2018 and charges were brought before a district court on February 11 of this year.

Police are also looking into another incident of suspected assault against Senler involving Bayern defender Boateng.

The two who have been dating since 2007 had a stormy relationship which saw them separated severally. In 2011, the pair broke up, the same year their twins Soley and Lamia were born.

In 2013, Boateng and Senler, a former fashion student, rekindled their relationship and got engaged the following year but are understood to have split again. The case continues.

A transgender teenager has triumphed in a bodybuilding contest after he turned his life around by beating a dangerous eating disorder.

Alex Tilinca, 18, hit rock bottom in 2016, after developing an eating disorder that saw him consume only one meal every 24 hours and weigh himself up to four times a day.

The teenager, who was born female, succeeded in turning his life around and competed against cisgender bodybuilders at the Victor Martinez’s Legends Bodybuilding Competition in New York on August 24.

Speaking to Metro UK about transitioning from a female to male, Alex, originally named Alexandra, said: “I didn’t really understand how I felt but I just didn’t want to have anything to do with being a female. I felt really uncomfortable with the fact that people saw me as a female.

“It was like living third party to myself. I was just going with the flow because I had to, not because I wanted to. I felt really wrong, deep down.”

After Alex watched videos about gender dysphoria on YouTube, he finally put a name to what he felt. He came out to his mum at age 11 and was met with love and understanding and began to transition at age 12. But two years later, he became angry and painfully envious of those who were born male around him.

Doctors had recommended that he lost some weight to ensure minimal scarring for his top surgery, but after losing the weight, the teenager became consumed by the idea that he had to lose as much weight as possible to look masculine. He became “terrified” to eat. At a time, he weighed just 100 pounds and was going to bed every night hating himself.

He said: “I had dysphoria, so I saw myself as hugely feminine, even though people around me were like ‘You’re really skinny, you might want to put some weight on’.”

He added: “I felt very trapped. I felt very helpless, like no matter what I did, it wouldn’t be enough. I always felt like I needed to overcompensate for the fact I was trans.”

Alex became interested in fitness after watching bodybuilding videos online. Soon enough, he set his mind on becoming a bodybuilder himself. Three years after beginning his journey back to health, Alex has now transformed his body and continues to take his physique to the next level by training at the gym.

The bodybuilder says that, as a trans man, he has found the most acceptance in the bodybuilding world.

Following his success in the amateur competition, he plans to take three to four years off to build muscle and ultimately aims to become the first transgender male to win the Mr Olympia title.

Alex said: “If a transgender male is able to compete against men who are born men, it’s inspiring for everyone, not just transgender people. It shows there’s no excuse”.

He continued: “I want to show that we’re not victims. People always kind of live under the assumption that we need their help and bodybuilding is like a physical embodiment of mental willpower and strength to me.” 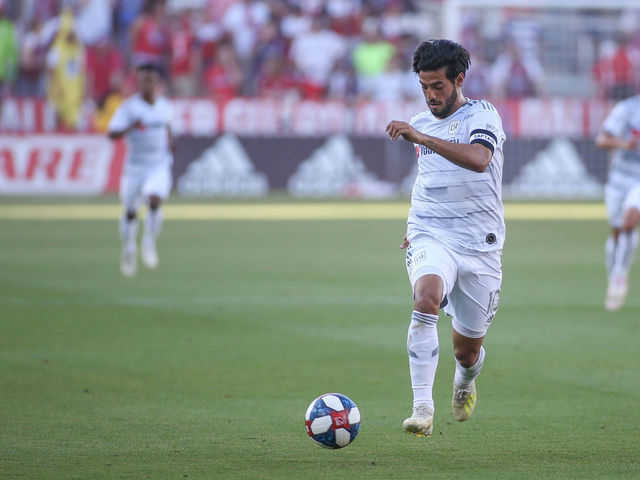 LAFC superstar Carlos Vela has revealed he was on the verge of a loan move to Barcelona during the January transfer window.

The Blaugrana, who were in the market for a backup forward at the time, ultimately made the surprise decision to sign Kevin-Prince Boateng. The ex-Ghanaian international only made four appearances for Ernesto Valverde before returning to parent club Sassuolo this summer.

Though the 30-year-old didn’t detail why the switch failed to materialize, Vela said he gave his agent the green light to complete the deal.

“I was really close (to joining Barca),” Vela told “BS The Podcast.” “In my second month of holidays … I was there with my pina colada … (and) my agent called me and said, ‘Look, Barcelona is calling you. They want you to play for four months and then you can come back to L.A.’

“I said: ‘Say yes, I don’t care how much money, I don’t care about nothing. Let me start training tomorrow. Give me four weeks or two weeks to be a little bit fit and then we’ll make it.'”

The Mexican attacker is in the midst of a dominant season with the Los Angeles-based side. His 27 goals lead Major League Soccer and his 15 assists are tied for second-most in the league.

Powered by Vela, league-leading LAFC are racing toward the Supporters’ Shield and are the overwhelming favorites to capture the MLS Cup.

Fulham footballer, Cyrus Christie, has accused supporters of the football club of beating and racially abusing his sister after they lost their first game of the season.

On Saturday, August 3, the EFL Championship club lost 1-0 to Barnsley. After the game, Christie said his sister was attacked by a male Fulham fan, with his wife justifying his actions with ‘racist remarks’.

‘To the Fulham fan that decided to hit my sister at the game today and his wife who justified his action with racist remarks I hope your proud of yourself and feel like a big man.

‘You’ll get what’s coming to you. Regardless how you felt about the result your actions are shameful.’

The football club has now launched an investigation into the incident, and promised to ‘take the strongest action possible’.

‘Fulham Football Club is investigating an incident which took place in the away end at the Barnsley v Fulham fixture this afternoon.

‘Should the perpetrators be identified, the Club will be taking the strongest possible action.’

The Super Eagles midfielders were in the house to officiate a game of football drills.

It is routine for the housemates of the Big Brother Naija PepperDem season to compete in games every Friday.

For this Friday, the game was a series of football drills and the organisers of the show got Super Eagles stars Ogu and Etebo to officiate.

After introducing themselves, Ogu put the housemates through the drills before the midfielders watched and timed them during the drills.

Ogu and Etebo have been in the country since they returned from Egypt where the Super Eagles competed in the 2019 Africa Cup of Nations (AFCON).

Ogu played one game for the Super Eagles while Etebo was in action all through as Nigeria went all the way to the final week of the tournament to win the bronze medal.

The rematch between Andy Ruiz Jr and Anthony Joshua may not be happening in the UK, as the Mexican-American heavyweight is pushing for the fight to take place in either of his two home countries.

Andy Ruiz had claimed the WBA, IBF and WBO titles, after he defeated Anthony Joshua in a fight which took place in Madison Square, New York, United States. Speaking to TMZ Sports on plans about the rematch, he said;

“I haven’t talked to him, but I’m pretty sure he’s training hard for the rematch and so am I. I want the rematch to be in Mexico or New York City again, Vegas, or here [in LA].”

When asked if the Nigerian-born British boxer will agree to this, he said;

“It doesn’t matter because I’m the champion… I’m calling the shots… We’re the A-side.”